This October we're celebrating LGBT History Month with the latest Bar of the Month.

Who was Harvey Milk?

Born in New York, he was quick witted and athletic, served as a Navy diver, then worked as a financial analyst on Wall St.

After moving to San Francisco with his partner, Harvey became an increasingly effective community activist and coalition builder, affectionately known as the Mayor of Castro Street.

His appointment to the Board of Supervisors (similar to City Council) in 1977 made him American's first openly gay elected official. He ran on a platform of community and equality: providing low-income housing, day care for working mothers, free public transport, small business tax reform and community oversight of police.

During his almost eleven months serving, Harvey delivered significant legislative wins. He spearheaded an important bill banning discrimination on the basis of sexual orientation, with just one dissenting vote, the man who would later become his assassin. This bill remains America's strongest gay-rights legislation to date.

Milk also successfully campaigned against the introduction of Proposition 6, which failed in its attempt to ban gay teachers and allies from working in Californian schools.

Harvey Milk's service was tragically cut short at just under eleven months when, on 7 November 1978, he and Mayor George Moscone were assassinated. The assassin was a former colleague, and the single dissenting vote against Milk's anti-discrimination bill.

Milk had previously commissioned Gilbert Baker to create the first rainbow Pride Flag (originally the 8 colours shown above), as a fresh, positive symbol to unite the community. Following his death, the flag was torn in two and hung either side of Castro Street in mourning.

Today, Harvey's life is honoured through public spaces carrying his name including a park, school and Navy ship. In 2009 and national day (22 May, Milk's birthday). In 2009, Harvey's birthday was formally recognized in California as Harvey Milk Day (22 May), and he was posthumously honoured with the Presidential Medal of Freedom by Barack Obama.

Or read this history.com feature.

Who is your favourite LGBT icon?

Right through LGBT History Month, we'll be featuring some of our favourite community icons on social media. Is there an icon you'd love to see us include? Please let us know! 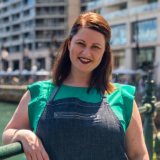 Lisette is the Founder of Treat Dreams, making it her fault that you've discovered treats you can't stop eating. She's highly distractible... so naturally the search for *proper* vegan chocolate took her away from the corporate marketing future she'd planned. Originally the TD Chocolatier, these days Lis plans the things and is grateful for her amazing team who make/do the things! Originally from Queensland's Sunshine Coast hinterland, Lis grew up surrounded by mountains, strawberry fields and beaches, and now calls Sydney's (much busier) inner west home. She's step mum to an almost fully grown human, plus cat mum to Knuckles (the actual definition of a scaredy-cat) and Cali.

Comments will be approved before showing up.

We'd love for you to read more about Mindy Woods, her incredible work, and her venue Karkalla in her own words - we hope you enjoy reading these articles, as much as we did.

Treat Dreams received a huge 27 medal mentions from the International Chocolate Salon. And not just in the vegan competition... in the overall chocolate competition too.

Could your new favourite have been voted among the worlds best?

How Chocolate is Made | Part 3 | Chocolatiers

It’s time for our favourite part of this in-depth look at how chocolate is grown and produced. This part is all about us, the chocolatiers!

A chocolatiers job is to take the chocolate makers product and turn it into confections.

Sign up for exclusive subscriber releases, blog updates and more.

Get access to exclusive subscriber only releases and more.